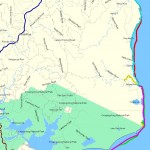 For five days and nights, our paddling team of four plied our way up and back along the Nadgee Wilderness coastline from Greenglades to Barracoota via Gabo Island.  The team was Andrew W, John P, Paul L and myself.

We contemplated a trip plan starting at Mallacoota and heading north.  The southern section of the Nadgee coast is dominated by long expanses of open beaches or long sections of clifflines.  Safe places to land when the swell is up are few and far between.  The forecast predicted strong southerlies and we intended to use these winds to our advantage.  However, the deep low had produced 3m swells at very long periods.  The forecast noted these as large waves breaking dangerously close inshore and, given the southern end of the trip has the more exposed coastline for landings, we felt we should give it a day or two before entering this area.  So trip plan A was shelved.

Plan B was for a start at Greenglades and heading south.  The landing at Nadgee River was supposedly somewhat protected from the swells.  We fancied we were up for plugging 20km into the southerly wind.

Actual winds for  Tuesday were 15kts from the south, gusting higher.  Not massive but it definitely saps your speed, getting hit by the stronger gusts and being slowed by the wind waves constantly washing over the foredeck.  On the way to Nadgee River we stopped off at Merrica River which is only a short hop from Greenglades.   The plan was to stay at Merrica on the return leg of the trip but I wanted to check it out now in case we skipped it for some reason.

The Nadgee River campsite on the northern side of the river is a pretty site in the trees on a small flatish area against the hillside.  In the late afternoon, we walked down the beach to the southern campsite which is nestled amongst the tea trees and gave a much more hemmed in feeling.  Only a hundred metres or so out the back of the southern campsite was a large billbong, it tannin waters were filled with reeds and looked amazing.

On the Wednesday, we continued our plugging into the southerly winds, slightly easier than the prior day.  We went past Cape Howe from Nadgee River and  we landed and walked up to the Monument that marks the border of NSW and Victoria.  The sand dunes were vast and spectacular and the views on the cliff edge looking over where we’d been and where we were headed was very satisfying and a lovely spot for lunch.

We had another break at Gabo Island and we were lucky to spy a number of penguins returning to their nests from their daily fishing expedition.

On the Thursday, we started the return leg back to Nadgee River which we did without a land break as we treked the 8km return to Harrys Hut to resupply water for the remainder of the trip.   The ‘good’ news is that by now the wind had shifted to be from the north so we were still heading into the wind.  Uphill both ways so to speak.

Friday saw us leave Nadgee River and head to Merrica.  Actual winds on the Friday were a touch higher at 17kts from NE.  Andrew decided to head way out to sea and paddled solo whereas the rest of us took in the views nearer the cliffline.  We stayed up on an elevated campsite on the northern corner of the beach.  Fairly protected but still allowed some sea breeze to keep the mossies at bay.

Speaking on mossies, and march flies, there were plenty at all stops.  I’m giving up on citronella candles.  I figure they do bugger all to stem the tide of mossies and it is just another thing I can take off my equipment list and make packing my kayak that little bit easier.  The mossies seemed to only hang around for maybe an hour either side of dusk so it was ok once they left us alone.

Saturday was home time.  We had a big 2.7km trip rounding the headland from Merrica to Greenglades.  Packed up and drove off.

My Outback Oven provided some good meals.  Not shmancy, just a little bit fancy.  Greenglades night 1 – roast lamb with infused garlic and seeded mustard glaze, Nadgee River night 2 – shepherds pie, Nadgee River night 4 – fresh bread with pumpkin soup (a personal favourite of mine), and on the last night I added a new string to my outback oven’s metaphorical bow, a freshly baked, butterscotch self-saucing pudding, admittedly from a White Wings packet but does that really matter?

One response to “Nadgee Wilderness”