A different way to the most exquisite island

by David Fisher with Joanne and Mark Alchin

“Priceless pastimes, boat hire, cruising on the MV Argonaut orSimba II, dolphin watching, ice cream, licensed café and restaurant, resort accommodation…”.  These are the advertising words of the ‘Tea Gardens–Hawkes Nest experience’ magazine¾and things we would not be experiencing. 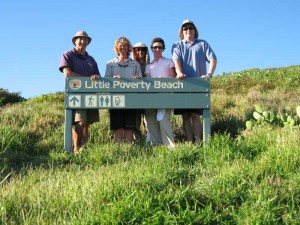 Ours was the Broughton Island experience and the same magazine summed it up nicely: “Treat yourself to a tour of NSW’s largest and most exquisite island”.  Dial your senses in to a weekend of 29 degrees, fine weather, wind 8 to 10 knots, slight to moderate seas, camping on the beach, island circumnavigation, a 10 km exposed crossing, paddling through the gauntlet and around the rocky crags and outcrops, watching the sunrise, riding the waves, walking the beaches and the peaks.  This was ours to soak up for a couple of peaceful days.

Heading across the blue-green waters with me were Mark and Joanne Alchin, Kate Keane and John Hutchison.  Rising at dawn on Saturday, we left early, having completed a solid amount of kayak packing the previous evening. 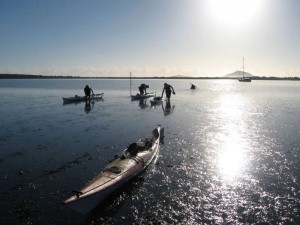 Our departure point was different from typical NSWSKC Broughton Island ventures; we left from Pindimar. It’s a sleepy fishing village on the north side of the bay, best known (if you could call it that) for its potential as a site for the nation’s capital, pitted against Canberra.

Neatly avoiding the increasing sea breezes in the afternoon, we negotiated the 26 km journey to Little Poverty Beach in Esmeralda Cove, Broughton Island by midday.  There was little to report on the outward trip other than the kayaks seemed to slide nicely along the silky flat seas.  Oh, and Kate told me not to mention about her sliding into the water mid-crossing for a ‘sea wee’. 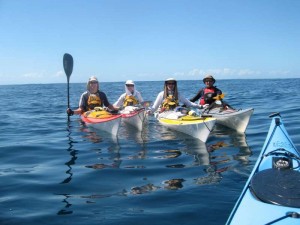 In the middle of the crossing. L to R David, Joanne, Mark and John (Photo by Kate N)

A pit stop on Jimmys Beach and several on-water rests meant we still had energy to burn for the Saturday afternoon.  After lunch we hopped back into the ‘yaks for the 10 km circumnavigation of the island.  By now there was at least a little breeze and some bounce in the water; not tough by any stretch but something to play with.  The Island is amazingly convoluted with pretty sandy bays, long sandy stretches, rocky reef platforms and cliffs, narrow passages littered with exposed rocks and sea caves.  This meant that the circumnavigation was punctuated with different sights to behold and obstacles to negotiate some surfing here and there and narrow passes to be paddled through swiftly to avoid the breaking waves and rocky reefs.

Back at the beach, post circumnavigation, it wasn’t long before we set out again, this time on foot, to walk across to the magnificent Providence Beach.  Kate jogged the length of the beach and the rest of us took the casual stroll option.  It is a lovely stretch of soft sand and you can easily picture yourself spending days lazing about on it, if it weren’t for the piercingly hot summer sun.

Hinted at by the tranquil setting of the sun, our relaxing evening slowly unfolded. First came the display of various gourmet dinners. Then we took a casual stroll of three metres to retire on our beach frontage lounge the good old Alchin tarp, where we shared many a laugh while gazing up at the universe, watching the endless stars twinkle and shoot across this perfect stage.  “How many stars?” you may ask…all the more for sharing John’s vintage red!!! 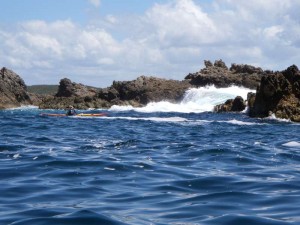 David in the soup (Photo by Mark A)

The Sunday weather forecast was for a day similar to the Saturday, with more breeze and swell forecast following us on the return trip. We decided to leave later in the day to maximise the wind power available to the sail-bearers amongst us.  We trekked up to Pinkatop Head, the highest point on the Island, standing at a ‘massive’ 90 m elevation.  Despite the meagre climb in elevation, the sun and heat made sure we’d all broken into a solid sweat shortly after the start.  This trek is something that I hadn’t done before and I can advise you that it is a worthy addition to your itinerary.  The view of the camp beach is wonderful.  After getting to a nice vantage point mid-trek, I returned to camp to swim while the others completed the final assault on Pinkatop.

The return to Pindimar from Broughton was a bit of fun.  Everyone bar Kate and I had sails and they hoisted them and rode the slight but nevertheless helpful wind.  Kate and I rafted up several times with the sailers to hitch a ride. I had acquired a parafoil with a second hand kayak I’d bought. I fast realised why next to no one has one¾they are bloody difficult to launch from a kayak, even with assistance.  If there is a knack to launching a parafoil then I don’t have it. and the line tangles made the whole thing a forgettable experience.  My advice: forget the parafoil and get a sail.

Cruising through the sentinel headlands into Port Stephens, we raced down big rollers that were forming with the swell, breeze and tide all in harmony.  A shark passed by¾all too close it was sufficiently large, dark and unfriendly-looking to be of concern.  That was my first shark + kayak experience and a little unnerving I have to say.

As many would  know, the Jimmys Beach area is littered with sand bars. These provided nice little waves to aid our passage.  We revisited our breakout spot on Jimmys for a rest and conveniently our direct line homebound crossed paths with the dolphin cruises so we were able to partake in some dolphin watching. With the sails set and everyone focusing on the remaining few clicks, the dolphin encounter was only brief but I always enjoy watching these guys feeding and playing and if reincarnation happens to be the universal reality, returning as a dolphin wouldn’t be too bad.

Tracing the long Jimmys Beach westwards, we opted for Corrie Passage, which flows between Corrie Island and Winda Woppa, and took it north to the Myall River and then headed west along the end of the river as it spills into Pindimar Bay. The tide was now flowing outwards so we were against it for the short trip up Corrie Passage, but as soon as we reached the Myall and headed west we were with the tide again and so accelerated into the final leg. This choice of final course was something different to wrap up our travels.

The great company of Mark, Joanne, Kate and John helped make the trip memorable.  This trip had a bit of everything to thrill us and it was nice that the weather kept things simple, as it does have the potential to get ugly out there.  There is no doubt that Broughton Island is a heavenly and picturesque place to visit and it is recommended as a staple in your paddling diet.