There isn’t much a couple of paragraphs can say next to a cute photo like this.  We were supposedly kayaking to go whale watching.  Sadly, the whales didn’t show themselves but Andrew E, John F and I caught sight of this delightful bird at close range as it was catching its lunch in the shallows of Camp Cove. 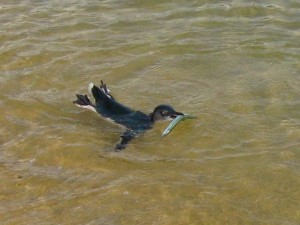 We were granted an audience with the penguin for a minute or two as a game of penguin versus bait fish was played out.  The bait fish was wriggling free of the penguin’s beak and trying to escape.

Needless to say, there was only one end to this story – the penguin had its feed.

It is always worth a paddle.