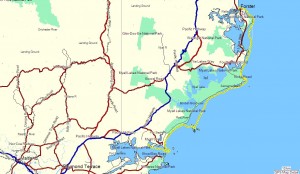 This was one of the most interesting expeditions I’ve paddled.

It was a three day 104 km paddle from Pindimar to Forster, one way with a car shuffle.  We planned ot overnight at Broughton Island and Seal Rocks, breaking the trip into roughly three days of 35 km each.  Six of us started: Matt, Mark, Terry, Shaan, John and I.

Although it was between Xmas and New Year, it rained or drizzled almost constantly, always cloudy and often the mist levels lowered to near on sea level making sight of land difficult at times.  Needless to say, the temperature was lower than normal too in the low 20s.  Wind was consistenly from the south.

We’d planned this trip from north to south to take advantage of the typical northly based winds but the forecast was for southerly based winds so we were forced to reverse the trip direction.  That didn’t really matter. 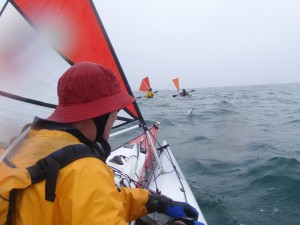 Unfortunately the trip was marred on day two with Terry hurting his back.  The group banded together to take turns in supporting and towing Terry some 12 km to Seal Rocks.  Swells and winds were from the south so we had some good wind and wave assistance.

Unfortunately Terry was too crook to continue.  John grabbed his car from Forster and took Terry home.

Aside from Terry hurting himself, the trip was really great.  I’d never kayaked north of Broughton Island and I can assure you it was a great coastline to explore.  North of Seal Rocks we saw a number of sharks…..exciting stuff as these were real ones, not reefies.  We couldn’t have timed the entry into Forster  through the bar much worse of the full outgoing tide.  The current was creating plenty of waves and bumps that we had to negotiate.  none of us wanted to fall in and be swept out to sea.  We had to battle the current very hard to make progress and what an incentive to paddle harder and stay firmly planted upright when Matt sees more sharks in the swirling currents!!