Do you know what?  With the Sydney climate, it makes me wonder why more of Sydney isn’t out and about enjoying the best harbour (and beach) city in the world.  I reckon I could shout it from the roof tops and would all the people come and invade the water?  Probably not! 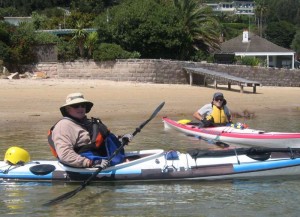 But my advice to everyone is to take advantage of our wonderful waterways.  Many of you do, and Lee K and John F put their hands into the air and joined me on this occasion for the beautiful, picturesque run from Palm Beach to Manly and into Sydney Harbour.

We had originally planned the trip to go in the other direction, heading north.  However, the weather forecast foretold nor-easterlies so we swapped the paddle’s direction to head south.  No big deal. This trip was set up from the start as KISS paddle (Keep It Simple).  No big drive to get somewhere out of Sydney, no packing the kayaks full of gear, no worrying about food and spending hours planning menus and shopping.

The simplicity was magic.   A couple of short car shuffles, dinner out on the town, brekky I at Shelly Beach and brekky II  at Balmoral’s Boatshed Kiosk. Too easy.

Now that Lee K is an interesting character.  He grew up on the northern beaches so he was a natural fit for our tour guide as we plied our way south.  He pointed out each headland into the distance; he could name them all and the bays too.  Lee is a walking, correction, paddling GPS with maps loaded.  And an aid to our morale as we paddled along, Lee recalled the first drowned bodies he ever saw as a grommet around Newport.

But for all Lee’s local knowledge, the Vietnamese restaurant we went too on Lee’s recommendation was actually Indonesian.  Stick local Lee, international geography obviously isn’t your bag.

My tips for a successful repeat voyage: 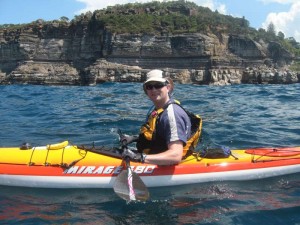 On a serious note, a low tide crossing into the Narrabeen channel is not on.  There aren’t one or two rocks to avoid – the rocks are everywhere and many are covered in oysters and barnacles.  High tide is the way to go (subject to conditions naturally) which is how we left the beach.  On our entry, we landed 20-50m from the channel and did a simple portage of 50m past the rocks.  As it happened, the surf was as flat as you’d probably get it even though we were there more or less close to low tide.  A high tide entry at Narrabeen has the other advantage of filling up the lake, which has some pretty big sand flats to negotiate at low tide.  In fact, the tidal delay in the lake is something like 3 or 4 hours.  These aren’t deal breakers as we discovered.  The Narabeen surf is the more critical issue.  However, there is no doubt that paddling the lake would have been simpler at high tide.

The wildlife joined us on Sunday morning, all in a short space of time.  First was the penguin that surfaced between our kayaks around Curl Curl followed by swarms of feeding Kingfish under us, next the aforementioned Shelley Beach eye poppers, next were Andrew E and Peter O off Blue Fish Point, shortly thereafter the breaching whale a distance offshore, and finally in the heads off Chinaman’s Hat were Peter L and Claus B.

All in all, a great trip.  Thanks guys.