Sheesh.  The buzz created by my article about the Outback Oven in the last edition was enormous, almost as long as the queue of people lined up to sample some baked delicacies.  As an addendum to that article, I can now add that I’ve since successfully baked pizza, more bread, sticky date puddings and biscuits in the oven.  All the recent baking was on remote Whitsunday beaches and my fellow paddlers helped me enjoy its output.

Anyway, back on topic.  People are salivating with anticipation from my teaser in the last magazine on how to keep a Magnum icecream frozen in a kayak.  So….the story goes something like this. 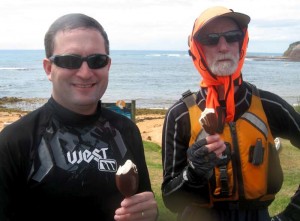 Some time ago, in mid summer, I froze two Magnums in a 2L block of ice and took it to Broughton Island.  We arrived on Broughton Island about seven hours after I had pulled it out of the freezer and packed it.  The block of ice was still rock hard with only a minimum amount of melted water in the bag.  I smashed the ice with rocks to extract the Magnums and my friend, Rod, and I ate them.  Rod and I thoroughly enjoyed our well earned Magnums on Broughton Island and, in true style, ate them slowly in front of our fellow paddlers, savouring every last morsel.  Secretly, however, I confess that while the chocolate on the outside was in good shape, the icecream interior had the consistency of double cream rather than the typical ‘solid’ icecream you’d expect.  So the conundrum of finding a method to properly freeze a Magnum on a kayak trip was born.

The frozen Magnum quest was reinvigorated many months later at a meeting where I was with two of our Club’s finest scientists, Drs Osman and Eddy.

When removed from the freezer, the block of ice is probably around -20 deg C being the temperature inside the freezer.  With the ice now exposed to the ambient temperature, the frozen water steadily warms to zero, being the phase transition temperature of water.  At this point it will absorb a large amount of heat as it transitions physical states from solid ice to liquid water but it will remain at 0 deg C throughout the process.

We theorised that we needed to find a liquid solution that froze at a temperature below zero but was capable of being frozen by your average home freezer.  A briny solution was suggested to be the best option.  I then set about my journey to discover the science (thanks Google) and the recipe.

For the few readers who actually want the science (the real scientists) or maybe even need it (the wannabees), I’ve put that at the end of my article.  For the rest of the readers, the science will be a bit pedestrian so please jump straight to the answer, being…

Freeze the Magnum wholly within a solution of water and salt mixed up 200g salt to 800ml water (20% concentration).  Put the Magnum in a plastic bag first to protect it from the briny solution.  This concentration of salt solution lowers the freezing point to around minus 15 deg C and ensures that the various milk solid ingredients in the icecream stay cold enough.

For the people that want to learn the science behind the experiment, the long answer is…

I scoured the countryside in a comprehensive survey and I learned that commercial freezers in supermarkets, service stations and convenience stores had an average temperature of -24 deg C.  I figured I needed to freeze my Magnum at this temperature.  My research had indicated that a briny solution, when fully saturated, will freeze at -23 deg C.  I initially tried to encase my Magnum in a less than saturated briny solution that had a freezing point of -20 deg C as I thought it would be within the capability of my normal home freezer.  My test run indicated, however, that the freezer didn’t have enough grunt to freeze the briny solution so a lower target of -15 deg C was set.

To do this, I need to use the Freezing Point Depression formula, being

i = the van’t Hoff constant which is 2 for NaCl.  I took this as a given as I didn’t really get it but it supposedly has something to do with two ions in the solution, the Na ion and the Cl ion.

Kb = Cryoscopic Constant / Freezing Point Depression Constant.  In this case for H20 it is equal to 1.858.

m = molarity which is basically the strength of the salt solution I was looking to produce in the first place.  That is, how strong a solution do I need so that it freezes at -15 deg C.

So then, with all variables of the equation known except m, I figured out using a bit of algebra that m (or molarity) = 4.04.

The final test case occurred on the FAD mission of March 2010 where I took a couple of Magnums frozen in the briny solution.  Peter and I plugged ourselves into a high specification Enjoyometer and I’m pleased to report that we red lined the meter and had to switch off the machine just in case we fried it.  The recipe was a success.  Yum.