This was the first year I’ve really gone for it. Minimising breaks on and off the water. I felt good, had done lots of Matt’s 40km Saturday morning training squads and was rewarded with my best time ever, completing in 13 hours. I only had one short break at Wisemans Ferry and otherwise stayed in my seat for the entire journey.

This is how I reported my race immediately afterwards:

Matt taunted me into not getting out and, aside from 5 mins at Wisemans, that is what happened.

I had a dark hour in which my arms wouldn’t work. I couldn’t really tell how long it lasted. I was just trying to shake it away. I loaded up on bounty bars, gels, a banana that I previously forgotten about and a bread roll (that combo sounds great doesn’t it!) and some time later, presto my body was shaking with sugar and ready to roll. I just had to keep the gels up for the next 3 hours…..and I powered to the finish at 5:03am in the dark.

Off to bed and to rest my many aches, pains and blisters.”

I’ve have a fair history with the event. My first race was in 1992 where the entire race was stopped at Spencer due to bad weather.  We were told that the wind was whipping up waves that was causing dramas for the K1s.  I was 20 and made it to Spencer in 14h 27m 2s.  That was a long time ago.

In recent times, with my ‘first’ year in 2006, I scored a DNF at Spencer, only 10km from the finish line. I was lousy and the night taught me that I had a lot to learn. I talked to a bunch of people afterwards and came to my own conclusions that I had much to fix such as my forward stroke, sore wrist, my fitness and weight, more endurance type foods and less sugary foods and the best, don’t try to snatch 3 hours sleep at Wisemans Ferry.  It didn’t help that I had a two young sons, a two and a half year old and a fifteen month old, disturbing my nightly sleep since they were born.  Excuses aside, that first HCC was a tough night and I set about fixing these issues for the next year.

Since 2006, my record has steadily been improving.

All current races have been in my Mirage 580 with my wonderful wife Lynda as my land crew.

Anyone who knows me knows that I still can improve. Although I can chug along nicely enough for hours on end, I’m not known for my efficient forward stroke. Also, my love of food precludes a level of fitness that I aspire to. I think gains will come if I can improve in these areas. 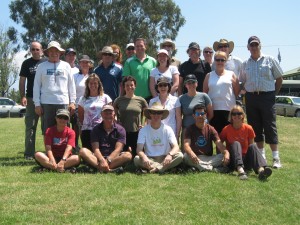 This year we had a great turnout from the NSWSKC. So much so that we accumulated enough points to rate second in the HCC club challenge. We had 16 people in 14 kayaks and everyone finished and Kate and Raewyn broke the record.  It was great seeing all of the club people on the day.