This was your normal paddle to BI for all intents and purposes….except for the 2 hours blip on our return leg when Mike had his run in with Con’s Cleft.  I organised a fun weekend out there for John, Paul L, Mike S, Bruce and myself on 10-11 October 2009.

Much has already been said about it but there will be some reading this that are unaware of what happened so I thought it worth summarising the incident so others can think about how they would approach it differently next time. 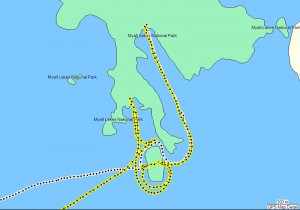 On our return to Pindimar in Port Stephens, we left Esmeralda Beach and went via Con’s Cleft and Mike went in unannounced.  Some in our group didn’t go through and went around the outside.  They were not comfortable with the conditions.  Paul and I went through together, my GPS later showing it was 4 minutes after Mike had entered.  We found Mike in the middle, swimming with his kayak, and it was evident he had whacked his head on the rock wall from the blood across his head.  Inside the Cleft the swell was surging considerably higher than outside and it was coming into the channel from both sides, causing significant peaks in the centre.  Paul and I helped Mike out of the cleft, abondoning Mike’s kayak.  We gave Mike to John and Bruce who used front and rear deck carries to take him to a rocky beach and administered first aid.  Paul and I went around the Looking Glass Island to find Mike’s kayak and tow it back.  After a rest to calm down, we all paddled back home.  Mike saw a doctor on his return to Sydney and the head wound needed 3 stitches to close it up.

There has been a lot of discussion within the Club of what went wrong and how to prevent a similar incident.  The most obvious consideration is whether Mike, or anyone, should have entered the Cleft that day.  Were the conditions such that we should have decided they were too rough to enter the Cleft?  Personally, for me, I was happy to go through the Cleft and ultimately did so before I became aware of Mike’s predicament.

Since the incident, the Club has said that helmets should be worn when around rocks which I support.  Mike wouldn’t have hurt his head if he had a helmet on.

I have learned that my beach briefing should have spelled out not to enter the Cleft until permission is granted.  You can never assume anything in your group and it is better for me as the leader to spell things out in daily trip briefings than to worry whether I’m stating the bleeding obvious to seasoned paddlers.  I now regularly say not to go into areas around rocks before we have had a chance to gauge local conditions, discuss it on the water, and consider action plans in areas of increased risk.

I also learned to consider the abilities of the whole group and to consider the possibility of having to perform a rescue.  I may be comfortable enough to paddle a gauntlet but one needs a higher degree of comfort when leading groups as you might have to effecting a rescue of someone in the gauntlet.

In most instances, I let Marine Rescue aware of my float plan on all my overnight Club trips as it is so easy to do.  Marine Rescue pretty much exist to educate and rescue boaters in trouble by logging our trip intentions, current whereabouts and to monitor us.  To not let them know our plans seems silly to me.  MR have the expertise and boats to rapidly deploy them and come to our aid  if needs be.  If this incident played out differently, say Mike’s kayak was heavily damaged, we would have needed assistance.

All said and done, I’m glad Mike wasn’t too badly hurt and lives to paddle another gauntlet.