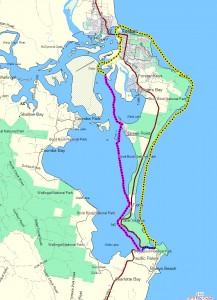 On 26-27 February, 15 paddlers journeyed on Adrian C’s ‘Best of Both’ trip.    The trip was a clockwise circumnavigation starting at the southern end of Wallis Lake, paddling north to Forster and to the ocean and then south to Elizabeth Beach where a short 17 minute walk to our cars completed the circumnavigiation of Seven Mile Beach, Cape Hawke and Forster.

The start of the trip was at the Reccy Club, located on the south eastern shores of Wallis Lake.  There was plenty of room to ready ourselves and leave our cars.  The lake was looking placid.  It was to be a relaxing day paddling the lake, via the coffee shop at Booti Booti / Tiona for morning tea and Green Point for lunch. 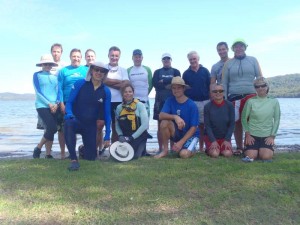 We camped at Tony’s Point Island.  Tony’s Point Island is not strictly an island but heck, it juts out into the lake and no one but campers are allowed.  It is run as part of Lani’s Holiday park, a caravan park, but because only campers are allowed it doesn’t have that caravan park feel.  It is huge at 25 hectares and camping is free range.  The only rules are no camping within 30m of anyone else and no caravans.   Having arrived at 3:30pm, we camped on the edge of the lake and it was a lovely afternoon spent relaxing and practising our skills.

This was the calm before the storm.  The late afternoon was eerily silent, only the cheering of a successful roll or the muffled noises from a failed roll pierced the air.  By the time dusk arrived, the darkness brought on an aerial blitzkreig of deafening proportions.  We were surrounded, were bombed and hopelessly outnumbered……by swarms of mosquitoes.  It was instantaneous and they were as thick on my bare arms and legs as bees are around their hive.  You could swat 3 or more in a swipe without too much trouble.  The light breeze and sole citronella candle didn’t dissuade them.  We all darted for our kit to don long sleeved tops and long pants.  Anyone caught without them, headed for an early night. 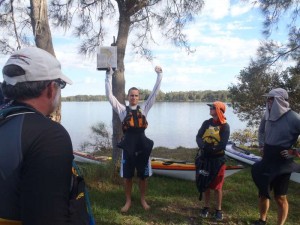 Departure on Sunday morn was at  0845 and we headed towards Forster for the 5km remainder of the lake passage.  We cruised past some fishing shacks, industrial woodmill and then shops as we entered the Forster precinct itself.  Along the way the water was crystal clear and I could see so many passing fish such as bream and flatheads.  I can only imagine the haul the recreational fishing fellas that we passed were pulling in.  We paused at the Cape Hawke marina to inspect the bar, now filled with a 2kt ebbing tide and more or less standing 1-1.5m waves from the incoming swell.  We noticed that the highest and most well formed waves were concentrated in the centre of the channel and there was a reasonably straight forward passage on the Forster edge which is where we paddled.  As I paddled the bar, a dolphin spectacularly leapt out of the water maybe 5m off my bow in a wave.  Nice 🙂 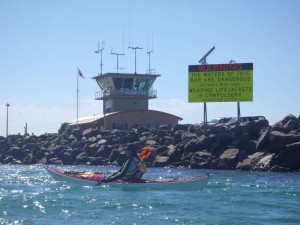 Out of the Forster bar, we progressed south.  The group split into two to allow Paul T. to show his leadership abilities in a more typically sized group.  John P and I took the Grade 3s and off we went.  It was a rather uneventful progression to Cape Hawke until we landed through the surf at McBride’s Beach on the northern outer tip of the Cape.  The beach was collecting the SE swell and even in the quietest corner there was still a 2ft and occasionally bigger wave to navigate.  We all managed a surf landing through up to 1m surf with mostly thrills and one or two spills.

The two groups re-grouped for a brief lunch with our group departing first for the haul down Seven Mile Beach.  I was cruising just outside the surf zone, enjoying the larger ups and downs of the swell and the forward progress from the occasional push.  Others had sails, not me this time.  Our interest picked up when we reached the cliff section between Booti Booti and Elizabeth Beach,  with interesting coves and rock formations to inspect. 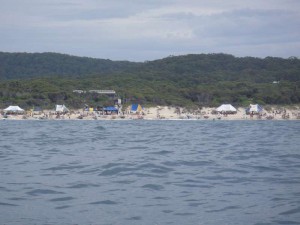 Just our luck that this weekend was the annual Battle of the Boats surf boat tournament with around 200 surf boats and their crew lining Elizabeth Beach.  They had marked out a course off the beach and we kept to the outside of that to stay out of their way as we crossed the beach into the southern corner.  The beach landing was relatively easy with a 1ft surf.   Not as much fun as the McBride’s surf landing for sure but there were plenty of buff bodies to please the ladies and gents in our group.

It was the end of the paddle.  Many thanks to Adrian for his efforts in organising it.  And to everyone for their company.

Below is a movie of the surf landings and exits at McBrides Beach on the Sunday. The surf is around 2ft.  The camera records the unfortunate landing by Owen.  If I may be constructive, there are two issues with the landing in my opinion that resulted in the dumping.  If you watch the movie a couple of times, Owen lets a wave pass under him and then paddles a bit but ultimately pauses as the critical wave approaches.  On the PC you can easily see there is 5 seconds between the last paddle stroke and when the kayak is in full tilt.  I think if Owen paddled throughout his approach to the beach, when that wave did catch him, its power would have diminished.  That might have been enough to ride the white water up the beach.  Instead, Owen was required to brace into the broach and that got him unstuck.

Get the latest Flash Player to see this player.

One response to “Wallis Lake to Elizabeth Beach via Forster”