I ran 3 navigating trips for the club centred around trying to paddle to the NSW Fisheries offshore “Fish Aggregating Devices”. The NSW Fisheries place these devices out to sea to attract fish and so to provide alternative locations for the fishing boats to go.  There latitude and longitude co-ordinates are listed on the departments website.  I plotted the location on a map and set about trying to paddle to them by map and compass alone, that is, without the aid of a GPS.. 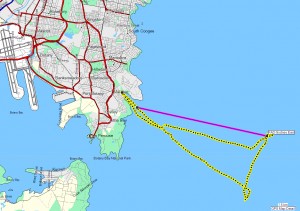 It all started when John P, Dee and I aimed to find the FAD offshore of Malabar / Long Bay without a GPS, just using map and compass. We paddled some 8 km offshore to where we believed the FAD to be but we never found it. We turned on the GPS to find we were way off track to the south. Funnily enough, when we paddled north to where the FAD ought to have been, it wasn’t there anyway.   It turned out the FAD had broken its mooring in recent storms.

Nevertheless, the fact that we were off course demonstrated that we needed to plan better prior to setting out. I believed we needed to prepare our maps better, to locate a number of easily visible landmarks to take back bearings off.  We needed to consider transit land marks. We needed to understand local currents better. 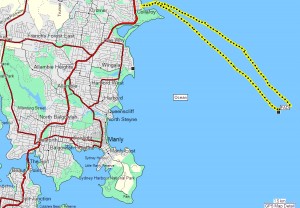 Which brings us to what I call the Curl Curl FAD. We were better prepared this time around. We did a reconaissance mission at around 2 km offshore on an earlier weekend. We had well prepared maps and thought processes on how to approach the paddle to the FAD.

On this trip was John P, Peter O and Paul L. We primarily used transits from the Bahai Temple and a cross transit from Centrepoint Tower.  We purposely aimed off to the north so that as we approached the general vicinity, we would “know” to drift ourselves south.

Thankfully, we were rewarded this time around on the ‘real’ mission.  John the eagle eyes spotted the buoy from around 600m away.  Overall distance was 19km. 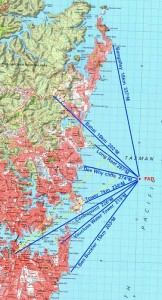