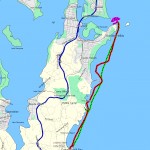 A group of eight of us set out on this 20km round trip.  Claudia S, Paul E, Alan T, Shaan G, Michael T,  Hans S and Dragomir.

We were mostly grade 3 except for Hans who was enjoying his first sea trip.  He’d been on the sea quite a number of times but this was his first virtually exclusively sea trip where from start to finish he had swell, seas, clapotis and shore waves and all in a constant state of change to deal with. 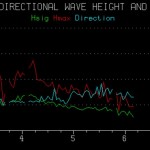 As an aside, I might take the opportunity to provide a comment on the standard BOM marine weather.  We have been taught to become students of the weather, to interpret the BOM forecasts and imagine what it will be like being on the water in our kayaks, leading a group.  Now the normal BOM marine forecast that is typically referred to covers a vast geographical area that extends 60 nm offshore and, in the case of the Hunter region marine forecast, some 170 klm of coastline.  Added to this, the normal BOM marine forecast is for a 24 hour period so the forecast needs to note the most extreme weather events for the geographic area for the 24 hour period that one might encounter and fair enough too. 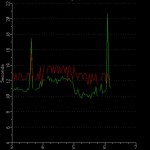 I often find that the computer generated model highlights why the normal BOM marine forecast says what it does but also offers greater detail that is most relevant to us paddlers.  When we are planning to be paddling only between say 9am and 4pm and in a certain area within a few klms of shore, the computer generated model can provide a much better picture of what is likely to happen to us, in our area of interest, in our time of interest.  Please note that the BOM computer generated weather model is updated daily and the forecats for the next 48 hours is prepared using a different forecasting model to that of days three to seven.  So review the forecast as close to the intended time of depature as you can.  That is all. 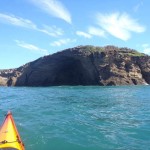 The trip to Catherine Hill was uneventful.  The swell was around 2m with bigger sets and so there was plenty of rebound and plenty of risk close to the cliffs.  We stayed well outside of all caves and gauntlets, not wanting to stray into the zone of trouble.  I’m not saying we didn’t have a good look but it didn’t take too many brains to realise that this group was relying on me to take them home rather than risk trashing myself in a cave so we gave them a wide berth and said we’d reconsider on the return leg.

Drago was dragging a lure and nailed a massive salmon (please forgive me if my fish identification is a bit wonky).  It was sight to see and besides Matt, Dargo is the only guy I’ve seen successful at kayak fishing. 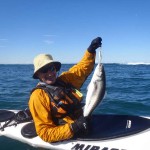 The fish was released but not before the triple hook had badly damaged the poor fish’s mouth.  I doubt that fish was going to heal up properly so I feel it is a useful comment to note that if you’re fishing then it is better to use something other than the triple hooks that come with lures as they are nigh on impossible to remove while seated in a kayak and trying to stay upright.  And the second set of hook can be removed altogether as they also get in the way when trying to unhook the fish.

We stopped at Catherine Hill for lunch.  There was a small shore break that I know Hans appreciated comes with sea kayaking launching and landing.

On our return, Claudia and I went into the what I’ll call the Snake Gully antechamber, the largish pool area in front of Snake Gully.  I find that the throat of this antechamber is the challenge with the waves breaking on the reefs each side and creating swirling rebound in the shallows but it then opens out into the pool and the bounce softens and there is plenty of area to manoevre and turn around. 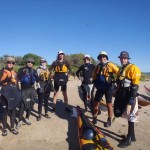 This trip is one of my favourites that I intend to make at least an annual event.  The reason I like it so much is the Swansea Bar.  Once I’d dropped the party back to the beach, Claudia, Paul, Shaan and I headed out for a bit of surfing practise on the bar.  I always time this trip to coincide with an outgoing tide which slows the waves down, steepens them up and makes it rips for surfing.  I guess the outgoing tide could make conditions too big but I’ve found it has made them just about right.  The beauty of surfing the bar is that you can ride the outgoing tide in the deeper channel with no waves back out the to the back again, ready for the next wave.  We caught waves for about an hour before calling it a day.