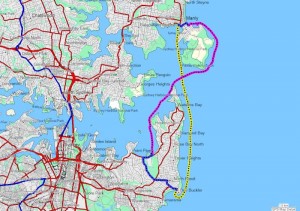 On 6 November eight of us headed out for another of Matt B’s creative trips, his figure eight urban epic Mk II.  The group included Matt B, Garry T, Cathy and Ian V, George J, Neil N, Andrew E and myself.

We met at Rose Bay at 7am and hit the road to Bondi at 7:23am in terrestrial mode.  At Bondi, we converted into the more traditional sea kayaking format of aqua mode and headed to Manly.  At Manly, again we converted to terrestrial mode and, after a bite to eat, legged it to Manly beach for the final on-water sector returning to Rose Bay.

The trip was a decent length and kept us plugging away most of the day.  I’ve captured the basic details below as everyone (those that didn’t do the trip that is) seems to be fascinated by how far we portaged our kayaks.  All of us in the know that did the trip know that portaging a kayak is pretty simple and a fun part of the trip too, not something to be avoided. 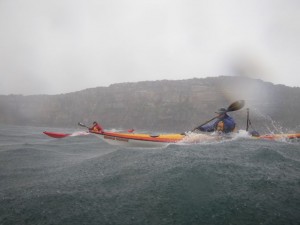 The atmosphere in one sense was great and, in another, wet (Photo by Matt B)

It was a wet, wet Saturday.  It was dry during the important times – meeting up and setting up, lunch and packing up but most of the rest of the time it pretty much rained on and off the entire day.

The first and major portage was fairly uneventful.  We received the usual quizicle looks from curious passerbys but the rain kept most people indoors so I suspect we avoided most of this.  We passed the golf course and shops, cruised through roundabouts and crossed traffic lights and pretended what we were doing was normal.

I think by the time we reached Bondi we were all quite pleased.  The walk was a reasonable distance but not far enough to completely tire us.  We could see Bondi as we approached so the anticipation was there.  Once we arrived, it was clear the waves were going to create some interest which they did.  They weren’t small enough to glide over rather were big enough to give me a good soaking.  Not too big to cause too much concern though.  I didn’t care though as I was already drenched from the rain and, as it happens, there was plenty more sea water to come. 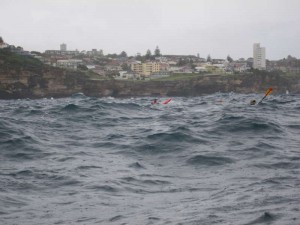 Conditions on the water included 2ft waves, a light breeze from the south-east around 10kt peaking up to 15kts but sometimes stronger and a south-easterly 1.5m-2m swell with some sets at 3m and a predominantly short period.

The run to Manly was down wind and great fun.  There were some surfing down the swells and lots of bounce off the clifflines to keep us enthralled.

It was so peaceful rounding north head.  The noise of the wind and the waves and kayak bobbing around had died and it was a nice and silent run in to the beach next to the Manly ferry terminal.  We tucked into some lunch at the pier and took time out. 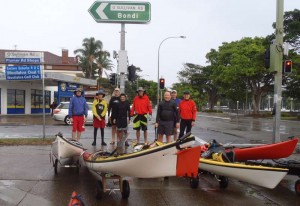 The trip across to Manly Beach was short.  The surf entry was mild and we plugged our way back to the heads into the breeze and swell.

Good on you Matt for organising another unforgetable trip.  Keep them coming.

I’ve spliced the footage from my camera and Andrew’s camera together to make a movie of our journey.  I hope you like it.

Get the latest Flash Player to see this player.