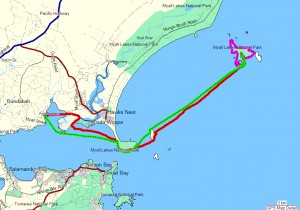 I was so pleased with this trip to BI that I ran for the club because I was able to share with a bunch of the paddlers their first trip out to this special place. We paddled the usual path directly out to the island (26km) and later that afternoon circumnavigated it (11km). On the return leg on Sunday, we paddled via Con’s Cleft a bunch of times each. I think I added up some 30 passes of the cleft without incident.  We returned into Pindimar Bay via the north side of Corrie Island, increasing the return distance marginally to 28 km.

I’ve another personal reason to remember this trip. It was the dinner I cook for me and John in the oven – a lovely mini-roast lamb each with potatoes, carrots, snow peas and gravy. John supplied the vino and it was a great meal.

Paddlers were John P, Claudia S, Bruce M, Tony M, Karen D, Michael T, Wendy S and the poet, Peter L.  We met up with Michael S and Audrey they came with us for the return leg,

Peter L produced a wonderful poetic rendition of the trip for the Club magazine and, with his permission, I’ve reprinted it here.

We staggered from our slumber and gathered on the lawn,
gobbled down our muesli on this early April morn
he said we should be ready to leave around first light
Broughton Island beckoned, we planned to stay the night

David was our leader, the one who gave commands
this early morning madness was the first of his demands
he said there would be nine, experienced and keen
that’s a lot of bloody kayaks for anybody’s team

Mick had started packing when Bruce and I got there
then Tony, Karen, John and Dave emerged with pillow hair
Claudia and Wendy followed after that
in silence we got ready, with such a lot to pack

The wind was calm, and water still when at last we got away
clear skies above and weather warm; t’was to be an awesome day
starting from Pindamar, in the back of Nelson Bay
our first stop would be Jimmies Beach that’s just eight clicks away

As we paddled to the east we had the tide behind us
we were moving at a cracking pace, though none of us would notice
’cause we talked a lot, like you do, when groups like this do gather
nothing special ever said but that doesn’t really matter

And when we stopped to have a break John went out to have a look
at conditions on the ocean side to see if it looked crook
all was fine, looking good, couldn’t even sense a swell
Dave, you’ve done a champion job you’ve even planned the weather well

So off we went around the heads where the waves sometimes get choppy
we rode the wash in and out  but the mighty crew was happy
being on the sea, Broughton bound, one more stop before the crossing
a snack, a drink at Cabbage Tree but little time for fishing

Its funny when you stop and think of stories that we’re told
of other trips on other days with wind and rain and cold
of mishaps in the gauntlet or Mike’s run-in with the cleft
that couldn’t happen to us, not on this magic trip

Then Dave spoke up, he told us straight, from the point he did not rove
“the Commodore will join us at Esmeralda Cove”
to see the look on Bruce’s face was something to behold
John, Dave and he from one last trip shared something still untold

They kinda went all silent as if they had to plan
how to hold the bugga off and keep him on dry land
so we rallied round to help them, for their focus not to slip
from the stuff we had before us, this was still an awesome trip

Our kayaks plied the waters blue until the hours past
and planted us before the Isle that was the Looking Glass
we poked around, in and out, then noticed to the left
what we all had sort to see, the cave they call Con’s Cleft

We didn’t stop or play too much, we were a hungry bunch
we made a plan to hit the beach and have ourselves some lunch
then head back out, do the Cleft and a lap around the isle
a great afternoon of paddling in good company and in style

That night we sat around the fire Mike, Audrey and us gang
with rough red wine and jelly beans thank heavens no one sang
but solved the problems of the world, all philosophers most deep
by nine o’clock we’re off to bed to get a good night’s sleep

The morning comes, I rub my eyes  and  make a cup a tea
as others crawl from sleeping bags and stare out to the sea
with one thing only on our minds and that’s to do with Mike
the Cleft’s a calling, he’ll want it done, you know that’s what he’s like

We stow our gear, prepare to launch, all of us but one
John’s fussing round and not yet packed even though the briefing’s done
we get away, we’re set to leave, but still another’s missing
Mick’s taken off , nature’s called, at least that’s what they’re saying

Eleven now, that’s the count with Commodore and Audrey
out of Esmeralda Cove – this pod’s a mighty party
we’re heading round to do the Cleft and David’s still quite nervous
safety first, that’s the thing, “be sure to wear your helmet”.

I’m not the last and not the first but still I feel the danger
the walls are steep and swells rolls through, no need to linger longer
this narrow gap, a broken wave could put you in the water
we all got through or so I thought, where’s Michael and the leader?

We gathered back as one big group on the lee side of the island
ducked in and out of rocks and caves while the wind began to lessen
then pottered back to Jimmies Beach, this stop will be our last
lunch time for us hungry souls much time since dawn has passed

So we paddled back to David’s place with dolphins by our side
those tourists on those tourist boats thought we had a hide
to hang around these gracious beasts, we didn’t pay a cent
“Followed us, they surely did”. Hey guys, no trouble meant.

We’ve made it back, we’re at the end, great time was had by all
to Dave and John and everyone, thanks, I had a ball
I’ll paddle with you anytime, that’s if I get invited
I’ll even do the trip report – you know, the sort that gets recited.