Terrigal to The Entrance and back

Posted on August 23, 2011 | Comments Off on Terrigal to The Entrance and back 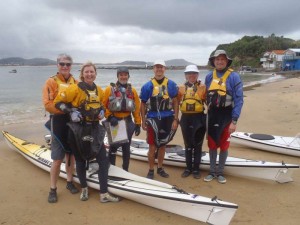 The gang at Terrigal, the start

14 Aug 2011: My Sunday paddle was exploring the coastling from Terrigal to The Entrance. Around 32km return. I landed at Bateau Bay, around the corner at Blue Lagoon where is the caravan park for potential future trips, and finally at The Entrance, at the bar on the ebbing tide. After a couple of spills in the surf at The Entrance, we returned to couple of kilometres to Toowoon Bay with a calm water landing for lunch. Unfortunately the cafe at the surf club was in the process of shutting so there was nothing hot available. The caffeine addicts had an enforced detox and my usual sugar hit of hot chocolate also went begging.

Rainbow on the way back

Trip buddies were Rae and Neil, Mark and Jo and Tony M.

On the return, some dark foreboding clouds were gathering. The forecast had predicted chance of thunderstorm from mid-morning to evening so my senses were alert, especially seeing that last weekend we had to get off the water to avoid being out there in the middle of a lightning storm. It was humorous that as we drew nearer to confront the storm, I was chatting to Rae about possible exit points and then we saw three Oyster Catchers flying in the opposite direction away from the impending storm. We looked at each other and wondered whether the birds knew the smarter option.

This entry was posted in Uncategorized. Bookmark the permalink.